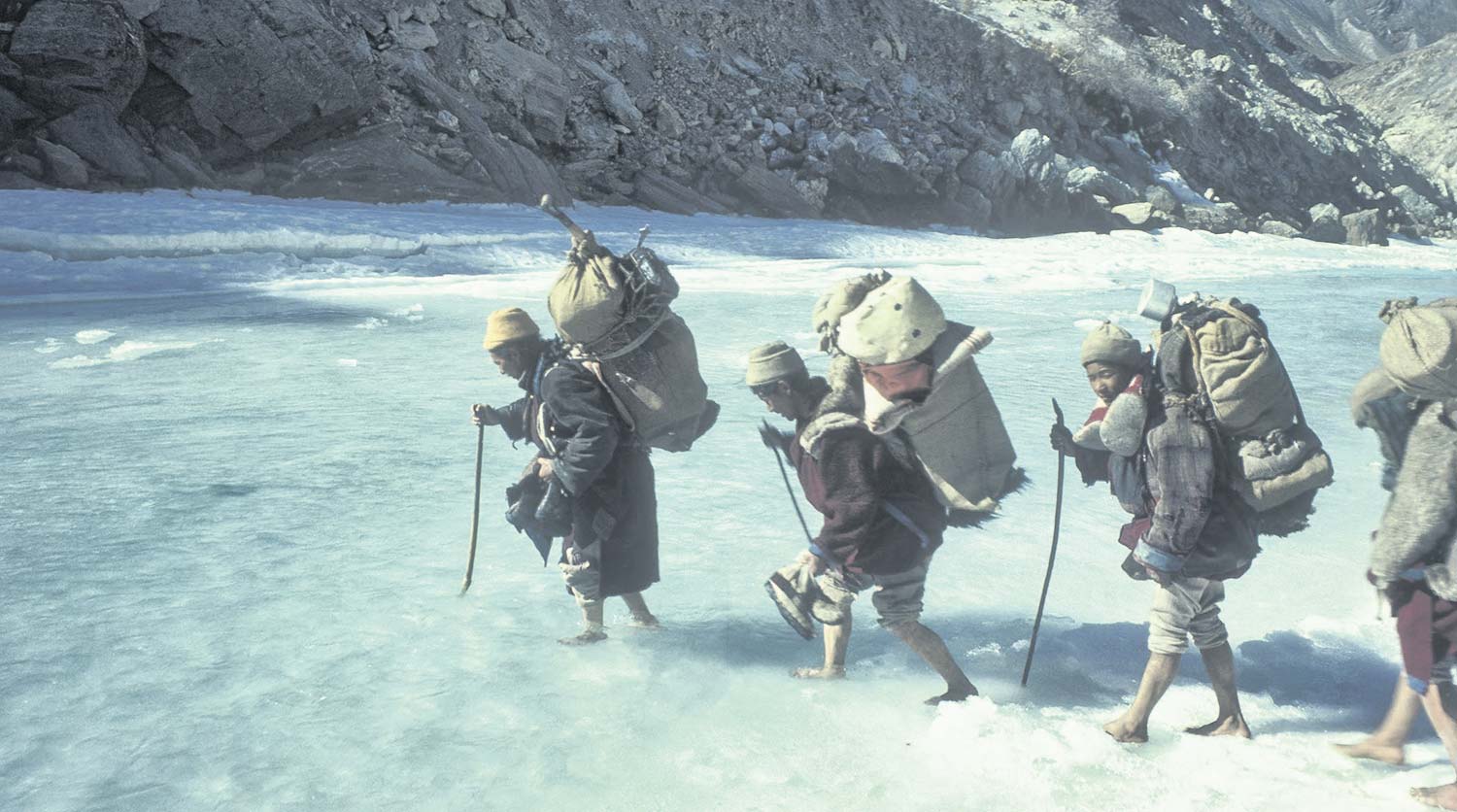 He sought silence, solitude and a tremendous challenge in the winter snows of the high Himalaya and now poet James Crowden draws us into that life-changing world in his terrific new book, The Frozen River.

At the age of 22, the Somerset author left a career in the British Army to travel to Zangskar, a valley of Tibetan Buddhists in the Ladakh region of the northern Himalaya, one of the most remote places in the world.

His aim was to explore the culture of the Zangskari people and join locals on their extraordinary winter trek down the frozen river Zangskar – carrying yaks’ milk butter to market.

In lyrical prose Mr Crowden tells how he became immersed in the Zangskari way of life, where meditation and week-long festivals go hand in hand, and silence and solitude are the hallmarks of existence.

And he tells with bone-chilling clarity the story of the week-long trek on the treacherous frozen river. Hemmed in by gorges with sheer cliffs, tapping the ice with sticks to read its strength, wading through icy water, facing freezing fog, conscious that snow leopards were near, and seeing their tracks. Sleeping on their knees they shared the food, shared the cold, shared the beauty of their silent world.

“As you tread upon its surface, the frozen river leaves its indelible mark upon your consciousness. It becomes the mirror of your soul. You develop an inner strength and confidence that stays with you for the rest of your life… I was not only aware of the danger but of intense beauty. Time had no meaning… the bonds with the rock and the mountains were as strong as the bonds between each of us.”

He could not in any event have told the time for he had deliberately left his watch behind when he began his adventure. This was back in 1976, a world without mobile phones, and when Mr Crowden first arrived in Zangskar he was happy to live by different rules.

Locked into the valley behind passes shut by snow, Mr Crowden welcomed the chance to learn from and debate with a people for whom “Buddhism and compassion runs through their daily lives like an invisible thread”.

He shared their simple, dark houses where in winter they huddle round stoves burning yak dung to keep warm. He brings this faraway world so close that we can almost feel the stove’s heat, touch the dark, feel slippery ice underfoot. He shared in festivals and family life, and had the rare honour of being taken deep into the bowels of a monastery temple to see 600-year-old frescos lit only by his torch and his guide’s candle. We can understand why Mr Crowden continues to follow the Buddhist way.

The final adventure is the most gripping of all – his personal challenge to do something “memorable” by skiing back over the now snow-covered route that had brought him to Zangskar. No one had ever attempted the feat. To do so he first had to learn to survive alone at temperatures of -25C and lower with a strong wind blowing. Even for a super-fit young ex-Royal engineer this seems to the reader a test too far.

That Mr Crowden achieved it, though reduced to eating skiwax by the end, is testament to his spirit and the compassion of villagers who welcomed the stranger into their homes.

Back home in England, Mr Crowden followed many paths, working as a boatman in Bristol docks, then, influenced by the Zangskari herdsmen, as a shepherd, shearer, forester and cider-maker. His poetry has often featured on Radio 4, television, and at literary festivals, and he is the author of the award-winning book Ciderland.

Last year Mr Crowden returned to Zangskar with his wife, Carla. At their home in Winsham, near Chard, she recalls the reactions of his old friends.

“People were pinching his cheeks and slapping him, delighted to see him. It was joyful.”

In 1976 Mr Crowden observed the first road being built into the valley. When he returned, a second was nearing completion.

““The Zangskari would say they are more prosperous as a result, but they are not taking their agriculture as seriously,” he says.

“Subsidised flour comes in on caravans of 100 horses, but the real problem is global warming.”

The snow line has gone up the mountains and without its water some villages have had to move downhill. Big change has come to the valley.

The Frozen River is published by William Collins on January 23. Print version £16.99, audio £12.99, ebook £9.99. The official launch in Somerset is on January 31 at Ebenezer Presents at the Seed Factory, Aller, near Langport. For more information, visit www.ebenezerpresents.com.